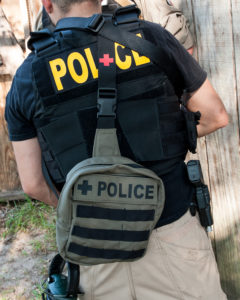 Vel Tye has recently added a new customer to its growing roster: the New York Police Department (NYPD). The NYPD is the largest and most storied police force in the United States. Vel Tye recently sold 30 of its patented Hugger Tactical Vests to the department. The Hugger is lightweight and allows the wearer to adjust the fit to his/her body while maintaining a full range of motion. These vests will protect NYPD officers from the dangers of their job while allowing them to move effectively and efficiently.

Vel Tye is also working on supplying the NYPD with custom-made vests for K-9 units, thus providing those hardworking police dogs with some much-needed protection as well. Vel Tye is delighted to be serving New York City’s two- and four-legged officers, and looks forward to expanding its partnership with the NYPD in the years to come.

Vel Tye was founded by U.S. Navy veteran Steve Herring in 1993, and joined the Mandaree family of companies in 2015. Vel Tye produces high-quality, USA-made tactical gear and accessories for military, law enforcement, and first responders from its manufacturing facility in Virginia Beach, Virginia.